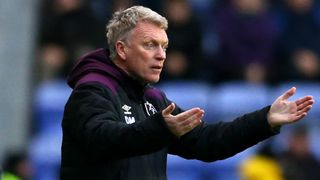 Goals in either half from Northern Ireland international Will Grigg ensured Wigan's passage into the fifth round, leaving West Ham with just three wins from their last 10 games in all competitions.

Moyes played down the defeat after leaving the likes of Andy Carroll, Marko Arnautovic, Mark Noble and Manuel Lanzini out of his team.

"People shouldn't be maybe that surprised because if you look at the team we played, I don't think our team is necessarily a Premier League team," he said.

"I think we had a scattering of Premier League players. Then we had young players, who're on their way to trying to become good footballers.

"Maybe some of them, in time, will go on to be top Premier League players, but at this point in time it's not the case."

West Ham's travelling supporters seemed to disagree with Moyes when they were heard singing "We want our money back" during the second half of a game in which Javier Hernandez, Pablo Zabaleta, Joe Harte and Joao Mario all featured for the visitors, who had Arthur Masuaku sent off in the second half.

Wigan defender Chey Dunkley disagreed with Moyes' assessment, saying: "They were missing big players like Carroll, Lanzini, Arnautovic and Noble, but I still reckon they put out a strong side.

"They still had a few experienced players out there and they are a Premier League side. You had players like Hernandez playing for them, and Joe Hart.

"We can't control who they play or field. We just had to make sure we were professional with it and we were."