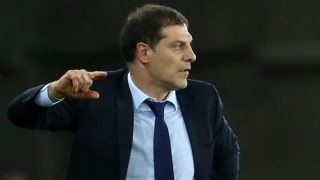 Slaven Bilic believes West Ham are progressing well, but says it will still take time for them to start thinking like a big club.

The Hammers are enjoying a strong season in the Premier League, sitting eighth after losing only four times in 19 matches ahead of their move to the Olympic Stadium for next season.

Bilic sees signs of progress on and off the pitch, but feels it will be a while until West Ham have a similar mind-set to top clubs like Saturday's opponents Liverpool.

"It is all psychological," he said. "We have got used to Liverpool being there – that is normal, that is the mentality, the structure of the club and that takes time to change.

"When you are trying to become a big club you need years of what Liverpool has – tradition, history.

"That reflects on your daily work. No matter who the coach is, whether the team is great. It is the jersey, the club.

"So when the smaller clubs like us are trying to move forward of course we want to do it as quick as possible but of course it doesn't go like that. It takes time to change.

"We are talking about moving forward our mentality. It is not enough to change the stadium even though this is a great move for us – brilliant.

"It is a step we have to take if we want to become bigger, but you are not only becoming bigger by moving stadiums.

"But we are not only moving stadiums, I think we have done a lot. We showed that when we have a full team that we are good, we improved a lot and showed the club is moving forward."

West Ham are one point behind Liverpool going into the match at Upton Park.