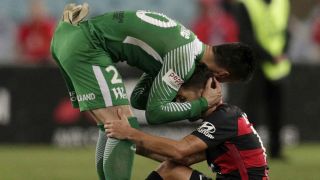 Western Sydney Wanderers missed out on a place in the A-League finals after a dramatic 3-2 defeat to Adelaide United on Sunday.

A thrilling clash at ANZ Stadium, in which four goals were scored and Oriol Riera converted and missed penalties before half-time, swung in favour of the visitors when Keanu Baccus was sent off 17 minutes after the interval.

Adelaide substitute Ryan Kitto struck the winner 10 minutes from time, condemning Wanderers to a seventh-place finish in the table.

Only a win would have been enough to see Josep Gombau's side leapfrog Brisbane Roar into the top six and they got off to a strong start, Riera converting from the spot after being brought down by Paul Izzo.

Izzo kept out a second spot-kick from Riera in first-half injury time and the home side's frustrations grew when Baccus was shown a red card for kicking out at Johan Absalonsen.

Kitto turned in Nikola Mileusnic's low cross in the closing stages to send Adelaide into the Finals Series on a winning note, with the Wanderers left disconsolate.