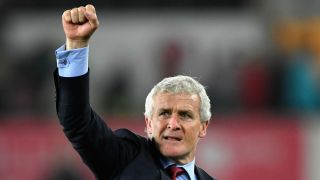 Southampton manager Mark Hughes insists his side still have work to do to preserve their Premier League status despite a precious 1-0 win over fellow strugglers Swansea City on Tuesday.

Manolo Gabbiadini's 72nd-minute goal moves the Saints into 16th place – ahead of Huddersfield Town on goal difference – and they know they will be safe if they avoid defeat against Manchester City on the final day of the season this Sunday.

Should Swansea not beat Stoke City on the same day then Southampton's result against the Premier League champions will be academic, but Hughes has still warned against complacency.

He told BBC Sport: "It is not mathematically certain. We had to come here and we had to win.

"If we had not won today it would have been very, very difficult for us. It is not done yet but tonight we have put ourselves in the position where we have a great chance to stay up.

"We will enjoy tonight, we got what we set out to get. A huge result, we are delighted but we've still got work to do."

Southampton's plans had been thrown into disarray when they were forced to change hotels the night before the game and ended up almost 40 miles away from Swansea.

Hughes, however, says that his side used that as motivation for their vital win.

He added: "We suspected that maybe some of the dark arts at work but it didn't let us affect us, in fact we used it as a motivating factor.

"That helped our focus and we won't be staying in the vicinity of the hotel Marriott Swansea - I think we will stick to the Vale of Glamorgan."

For Swansea, meanwhile, it is looking increasingly bleak. They need to beat Stoke City at the weekend and hope that Huddersfield fail to pick up any points against Chelsea and Arsenal in their remaining two games or that Saints lose heavily to Pep Guardiola's Premier League champions.

It's all over at the Liberty. Gabbiadini's goal separates the two sides.May 8, 2018

"Now we are in the position and we don't have a lot of time. We don't know what will happen tomorrow and at the weekend we must try and do our part and try and win the game against Stoke.

"Now we don't have the things in our hands – it is the reality but let's see what happens. We must do our part and win the game and then wait.

"We are professional, it is not easy this situation. We must react very fast because we have a game on Sunday."