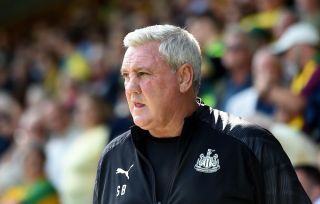 Steve Bruce waded into a morass when he agreed to take on the sizeable task of filling Rafael Benitez’s shoes at Newcastle.

However, two games into the new Premier League season, the Magpies’ head coach finds himself further embattled after successive defeats by Arsenal and promoted Norwich.

Here, the PA news agency takes a look at the challenges ahead of a man fighting fires on and off the field.

How much of a problem is Benitez’s legacy?

A significant one. There was huge popular support for Benitez’s retention after he had steered the club back into the top flight and kept it there for two seasons, and each defeat since his departure simply serves to enhance his achievements. Whatever the whys and wherefores of his exit – Benitez responded angrily to managing director Lee Charnley’s claim that he left purely for the money he was offered in China – he casts a long shadow and unfavourable comparisons are inevitable given the paucity of the fare on offer to date.

Have the new signings hit the ground running?

Bruce’s late appointment and the subsequent delay in squad rebuilding did little to aid the process of bedding in new players before a ball was kicked in anger. Jetro Willems’ error against Arsenal proved costly, while Allan Saint-Maximin showed flashes of what he might bring during a late cameo in the same game. But it is record signing Joelinton who is currently the biggest concern having passed up opportunities to open his account in both games. Bruce will hope the 23-year-old £40million striker finds his feet sooner rather than later, but those with longer memories will remember a young Jon Dahl Tomasson suffering a similar start to life on Tyneside from which he struggled to recover before going on to enjoy a glittering career elsewhere.

How has Bruce changed the tactics and to what effect?

Bruce’s favoured 3-5-2 formation is yet to pay dividends, with players who had been drilled by Benitez in a system which saw two midfielders employed in holding roles in front of either a back four or a back three yet to fully adjust. The inclusion of Jonjo Shelvey in a quarter-back role has changed the shape of the team and, with the front two of Miguel Almiron and Joelinton very much a work in progress, the formidable organisation forged under the Spaniard has deserted the Magpies.

What has been the reaction from fans?

Thanks to everyone who has supported us and the 10 other fans groups in our collective in the run up to #BoycottArsenal and those who joined our protest this afternoon. This is just the beginning – Howay The Lads! pic.twitter.com/qI24BncPl9— Empty For Ashley (@EmptyForAshley) August 11, 2019

Predictably, not good. Most of the ire, as it has been for much of the last 12 years or so, has been directed at owner Mike Ashley over Benitez’s departure and his funding of the club. Bruce has been caught in the crossfire and, while protests have been targeted at the regime rather than the new head coach, those most vehemently opposed to his appointment are claiming justification in the wake of a start which to date has provided more questions than answers.

How quickly could fortunes change?

🗣️ "Let's not kid ourselves – we haven't done enough. I saw some glaring mistakes and errors which we've got all week to put right."— Newcastle United FC (@NUFC) August 19, 2019

As it was last season, the fixture list has not been kind to Newcastle. They head for Champions League finalists Tottenham on Sunday before entertaining 2016 Premier League champions Leicester in the Carabao Cup and then Watford in the league before travelling to meet Spurs’ European conquerors Liverpool, with Manchester United, Chelsea and Wolves waiting in the wings. The Magpies won none of their first 10 league games last season and collected only three points in the process. Bruce is aware a repeat is unlikely to attract the same level of patience afforded to his predecessor.