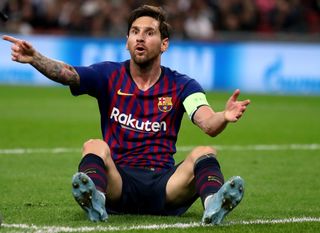 Questions have been raised about Lionel Messi’s future at Barcelona after their Champions League capitulation against Bayern Munich.

The future of manager Quique Setien has been called into question, just seven months into the job following their shocking 8-2 loss in Lisbon, the club’s heaviest European defeat.

Here, the PA news agency takes a closer look at what the future could hold for the Argentinian.

What happened at Barcelona?

Barcelona have invested heavily but ineffectively, spending more than £350 million on three players, two of whom started from the bench on Friday – with the other, Philippe Coutinho, scoring twice for Bayern Munich. Ousmane Dembele returned to the bench following a nine-month injury lay-off but was unused, while Antoine Griezmann has not replicated his Atletico Madrid form.

Will he move on?

It is five years since Barcelona and Messi last won the Champions League, with the diminutive Argentinian now 33 and coming towards the end of his career. The club have been unable to provide their talisman with the support required for him to continue his prolific form, and he has been overshadowed this season by Bayern’s Robert Lewandowski who fired in 54 goals in all competitions. It is also worth noting that Messi has not yet signed a new contract with Barcelona.

Where could he go?

If Messi does chose to leave Barcelona, he could seek a reunion with former manager Pep Guardiola at Manchester City, although there would likely be a substantial transfer fee. Inter Milan have also been linked with the striker over the last couple of years, and are not short of money, Messi’s former team-mate Javier Zanetti is the club’s vice-president.

Could Barcelona survive without their talisman?

Who better to lead you into battle? #Captain#Messi#BarçaBayern@ChampionsLeaguepic.twitter.com/3RVnCrugUt— FC Barcelona (@FCBarcelona) August 14, 2020

With Messi already 33, it is likely the club have already begun preparations for their future without him, although a Messi-less Barcelona is hard to contemplate. The six-time Ballon d’Or winner has spent his entire senior career at the Nou Camp, but with his current deal expiring next year, his future remains uncertain. Undoubtedly, Barcelona would find it almost impossible to replace the player who has scored over 700 goals for the club since 2003, and would have to rebuild the team.