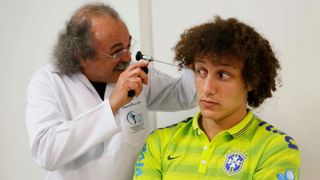 Gleaming machines, computer monitors and sports science experts – walking into the human performance lab at Perform at St George's Park, it is easy feel as though you have been cast as Rocky villain Ivan Drago for a workout at his sinister hi-tech training base.

Shortly, there will be emphatic proof that I am not, by any measure, that type of physical specimen.

Housed amid the Football Association's sprawling national football centre in Burton, Perform's facilities provide a one-stop shop for the pre-signing football medical. As the deadline to English football's mid-season transfer window looms, the facility is prepared to go into overdrive.

"It's a good time," says sport science lead Dr Carl Wells. "It's hectic because you know you can get a phone call to perform a last-minute medical on a player who is making a last-minute move.

"The information we can provide to the club, to the player and to the agent can be really valuable."

Dr Wells is my first port of call as a selection of apprehensive journalists experience a flavour of the what goes on behind the scenes on deadline day.

Following a brief warm-up on the exercise bike, I am strapped in for leg lifts on the imposingly named isokinetic dynamometer.

This machine examines any possible strength imbalance between quadriceps and hamstrings which could be a precursor to injury. A good ratio is around 60 per cent of hamstring output to quads.

At slower speeds, I chart 45 per cent, but find myself within range at high speeds. Dr Wells charitably describes this as "interesting".

Next up is the dreaded VO2 max test – a method of discovering a player's maximal aerobic uptake.

Premier League stars will do this to exhaustion, through incremental increases in treadmill speed, eventually running at more than 20 kilometers per hour.

Fitted out with a pinching nose clip and oxygen-mask/gumshield hybrid, I am grateful time is called at 13km/h of sweaty trundle.

Onward to the sports medicine department and, with those flimsy hamstrings in mind, I wonder what constitutes a passed or failed medical.

"We're not as black and white as that," says clinical director Dr Charlotte Cowie. "A good medical will really just give the club the tools it needs to make an assessment of how much risk of injury this player has."

Dr Cowie boasts vast experience across a number of sports including tennis, athletics and cycling, and worked at her third Olympic Games as part of the Team GB setup at London 2012.

She enjoyed a spell in the Premier League with Fulham and Tottenham during the previous decade and shared an instructive pre-signing medical story.

"I've been in the situation where a manager has said to me 'I want this player now, I think he could score 20 goals for me this season'," Dr Cowie explained.

"I said, 'Well, there's a long-term injury risk ,but he's fine now'. And he said 'I'm happy to take him because I need him now. If he breaks down in a year or two I'm ready to accept the risk that we may have to buy again next season, but he's right for me now'."

Following in the footsteps of this delicate goal-poacher, I undergo an examination from Dr Cowie, where I discover niggling pain on the outside of my left knee is probably related to weakness in my left thigh and hip muscles.

Elite physiotherapist Steve Kemp concurs and his session throws in the bonus information that my weak hamstrings are also tight, opening up the possibility of lower back problems.

It is becoming a day of hard truths.

Kemp has served as part of the England team's medical staff since 2012 and estimates, when including the full array of MRI scans, CT scans and cardiac screening, a thorough, complete medical can span up to 48 hours.

"On transfer deadline day you haven't got that time," he explains. "The clock is ticking and the club, the medical department and the chief executive are going to have to decide what's most valuable to them.

"A number of the fitness tests may be dropped out. You're going to want just your key information.

"Are they a really high-risk signing? Have they got a cardiac screening or something that you have to make sure you've assessed they're safe to play?

"And how can you quantify that risk in the shortest period of time? That's the challenge on deadline day."

It is a challenge that Kemp, Dr Cowie, Dr Wells and their colleagues at Perform at St George's Park appear superbly well-equipped to meet.

If only my weary legs were anywhere near as fit for purpose.

***Perform at St George’s Park are available for the support of players and clubs during the transfer medical process, to keep up to date with Perform news follow @PerformSGP on Twitter.***