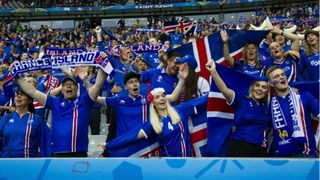 When a torrent of boos swelled up inside the Stade de France as Iceland emerged for their pre-match warm-ups, we maybe should have seen it coming.

This tiny nation made waves and countless friends at Euro 2016, but there was a limit to the goodwill among the locals.

Iceland were quarter-final opponents, an irritant and an obstacle to the glory craved by France supporters in Saint-Denis. There was no room for sentiment; this was business.

The pre-match atmosphere was thrilling as 'Allez les Bleus' and thousands of tiny tricolours competed with the din of the Icelandic contingent and their Viking chant calling card. Both national anthems stirred emotions to fever pitch.

But if it was honours even in the stands, on the field there was only one winner in this song of ice and fire - a smouldering France inspired by the blazing, brilliant Antoine Griezmann.

Iceland's denouement at a stadium that could almost hold a quarter of its population should not bear the tiniest stain of ignominy.

However, they progressed through the tournament on the back of an average possession count of 29.7 per cent and an awful lot of running.

Tiredness of both mind and body was evident during their first-half collapse and this was no state in which to face an irrepressible force in the form of Griezmann.

Olivier Giroud's brace will earn much-deserved positive headlines for France's main striker - this victim of the boo-boys now has 10 goals in his past nine international starts - but Griezmann shone once more on the back of his match-winning turn against the Republic of Ireland.

Seemingly stung by agonisingly missing out on La Liga and Champions League glory with Atletico Madrid last season, the 25-year-old is performing with a bristling intensity that will only be satisfied by Euro 2016 glory.

Griezmann sent in the corner for Paul Pogba to get his tournament up and running and laid on Dimitri Payet's third of the campaign, but it is he who is now Deschamps' trump card. His name rung into the Parisian night throughout the 90 minutes.

4 - Antoine Griezmann is the first player to score 4+ goals for in a major tournament since Michel Platini at EURO 1984. Heir.July 3, 2016

The cruelty of France going 4-0 up before half-time was tempered by the beauty of Griezmann's fourth of the competition, a delicate and sumptuous lobbed finish after Giroud dummied a Pogba pass. It was the sort of finish players dare not attempt unless everything is working perfectly in sync. The Atletico star is in that place.

He gives his coach a conundrum to solve. N'Golo Kante would be a safe bet to return for the semi-final in Marseille to deal with Germany's midfield might, but that would mean shifting Griezmann out of the central role where he has been so utterly devastating. It is a close call. Major tournaments are won and lost on those.

There was no victory for the romantics on Sunday, but wonderful consolation as Iceland's warriors turned 4-0 into 5-2 at the final whistle, Sigthorsson and Bjarnason scoring as they did against England and Portugal respectively.

When we think of Iceland's contribution to Euro 2016 years from now, we will smile. For that gift to a game that so often takes itself far too seriously, it was comforting to see these admirable over-achievers depart with their dignity intact.