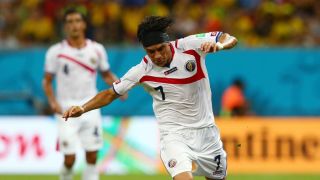 The 31-year-old, who appeared in two World Cups with Costa Rica, signed a multi-year contract with the Blue and White and becomes the second new arrival to join Carl Robinson’s side this offseason following last month’s acquisition of Japanese striker Masato Kudo.

He will join a pair of familiar faces at the Whitecaps in center back Kendall Waston and on-loan right back Jordan Smith after playing with his fellow countrymen at Deportivo Saprissa.

"Christian is a proven winner," Robinson said in Wednesday’s press release. "He's a player we've coveted for a while and we're delighted to add his wealth of experience to our club. Christian is a natural winger and we expect him to complement our young attacking players very well."

Bolaños brings a wealth of experience to Vancouver. His career includes spells in Scandinavia, starting with Danish side Odense Boldklub before moving to Norwegian club IK Start. In four seasons with Danish giants FC Copenhagen, the winger claimed two Danish Superliga titles and the Danish Cup title. He also registered three goals and three assists in 22 UEFA Champions League starts with Copenhagen and made 10 UEFA Europa League appearances with the club. Prior to his second spell with Saprissa, Bolaños had a brief stint with Qatari club Al-Gharafa in the Middle East.

His 60 caps for Costa Rica include appearances at the 2006 and 2014 World Cup, having been part of the Central American nation’s surprising run to the quarterfinals at Brazil 2014.

"I'm very excited to join Whitecaps FC," Bolaños said in the club’s announcement. "This is a new challenge for me and a big responsibility. I look forward to meeting my new teammates and getting training started for the new season. My goal is to help this club win a championship."

On Tuesday, the Whitecaps selected three more players in the final two rounds of this year’s MLS SuperDraft. This included two University of Washington midfielders in the highly-rated James Moberg in the third round (50th overall) and Victoria, B.C.-based Josh Heard in the fourth round (71st overall). With their final pick, the Whitecaps selected defender/midfielder Tyler David (77th overall) from Saint Louis University.

The trio will report for preseason with the club’s USL side Whitecaps FC 2 on Monday, February 1.