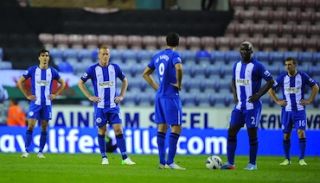 Wigan, who face Manchester City in the cup showpiece at Wembley on Saturday, fell apart in the second half at the DW Stadium and remain third from bottom of the standings on 35 points with two matches to play.

They had led 1-0 thanks to a Roger Espinoza goal just before the interval and 2-1 after James McCarthy's strike early in the second half but Swansea replied with goals from Angel Rangel and Itay Shechter before Tiendalli broke the home fans' hearts.

"If you watched the first half, you would never credit what happened in the second half," Wigan manager Roberto Martinez told Sky Sports after his team twice lost the lead.

"The team is ready to bounce back and make sure we take opportunities in the final two [league] games.

"It's a missed opportunity. The injuries we've been picking up on the way have been very, very costly. We know we've got tremendous character and we are determined to fight for every single point that is left."

The battle to avoid joining Queens Park Rangers and Reading in the Championship next season is set for a gripping finale with Newcastle United, Norwich City and Sunderland all on 38 points.

Southampton, on 39, and Aston Villa and Fulham with 40 are not yet assured of safety.

Manchester City clinched direct qualification for the Champions League group stage and moved closer to securing the Premier league runners-up spot after a first-half Edin Dzeko goal was enough for a 1-0 win at home to West Bromwich Albion.

"It was a difficult game because we changed a lot of players but it was important for us to win the game," said City manager Roberto Mancini.

"After 10 minutes we started to play better and we missed five incredible chances to score which made it difficult for us in the second half."

Wigan, who will play in next season's Europa League after Cup final opponents City guaranteed a top four finish, have made a habit of escaping the drop in their eight-season stay in the top flight but they must now rely on other sides slipping up.

Honduran Espinoza, making a rare start, gave Wigan the lead when he struck a left-foot volley from Swansea keeper Michel Vorm's miscued punch past the stopper on the stroke of half-time but the visitors hit back soon after the break.

The League Cup winners had not won a league game in seven and had only one victory since their February 24 Wembley triumph but were rewarded for a bright start to the second half when Rangel volleyed home Wayne Routledge's cross after 50 minutes.

Wigan went back in front three minutes later after McCarthy took a pass from Gary Caldwell and slotted past Vorm but Swansea quickly replied when Shechter's shot took a deflection off Emmerson Boyce to beat keeper Joel Robles.