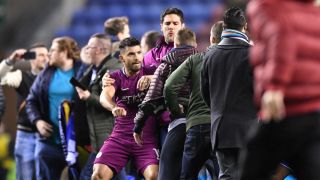 Wigan Athletic have promised a full investigation into the pitch invasion that marred their FA Cup win over Manchester City on Monday.

Will Grigg scored the only goal of the game after 79 minutes to book a quarter-final tie against Southampton for Paul Cook's side and end the runaway Premier League leaders' prospects of a quadruple.

Hundreds of fans streamed onto the pitch in celebration after the final whistle, with City striker Sergio Aguero involved in an altercation with one individual who approached the player from behind.

Wigan accept that "a minority" of fans "acted in an inappropriate manner" and have vowed to take action.

A statement released by the League One club on Tuesday read: "Following Monday night's enthralling victory over Manchester City in the Emirates FA Cup, the club were disappointed to see supporters encroach the pitch at the final whistle.

"'Player and staff safety is of paramount importance and we will conduct a full investigation.

"'However, it is important to not let the actions of a few supporters detract from an incredible night at the DW Stadium. A special atmosphere was created by both sets of supporters and the match was yet another memorable day in the history of Wigan Athletic.'"

The FA is expected to conduct their own investigation into the incident involving Aguero, who was seen lashing out at the fan as Wigan defender Chey Dunkley tried to calm the situation.

Meanwhile, some of the travelling City supporters had an altercation with stewards, during which objects – including an advertising hoarding – were thrown.

Reacting to the events, Wigan chairman David Sharpe told BBC Radio 5 Live: "It is not nice to see, football is emotional, it is what it does to fans. But I don't like to see this at the end of the game.

"It is a massive result, but we have to stay classy in football. I don't like what I am seeing here."