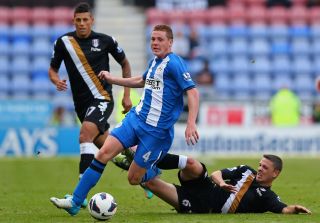 The 22-year-old midfielder was part of the Wigan side that won the FA Cup last season before suffering relegation.

Whelan has confirmed a bid from Everton has been turned down with the transfer window set to close on Monday, explaining that the offer was not sufficient.

"We rejected the bid because it's still not near the value we'd expect," he told BBC Sport.

"If we have to sell James then we will have to bring someone in and that's not easy, I really hope he stays with us. Everyone seems to leave the business until the last minute."

While Wigan have made a reasonable start to life in the Championship, gaining eight points from five games, speculation still surrounds a number of Owen Coyle's players.

One of those rumoured to be interesting Premier League clubs is young winger Callum McManaman, who hit six goals in 30 appearances for the club last season.

However, Whelan insists the 22-year-old England under-20 international will not leave the DW Stadium before the transfer window shuts.

"Callum McManaman is not leaving Wigan," he continued.

"He is a great talent with a bright future and we think we can develop him. He’s going nowhere."