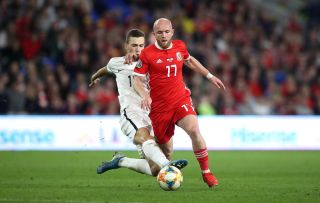 Jonny Williams believes he is back on track for club and country after injuries almost derailed his career.

Williams made his first Wales start since Euro 2016 in Monday’s 1-0 friendly victory over Belarus in Cardiff.

That return to the international stage came after some impressive early-season form, which has helped surprise package Charlton to second spot in the Sky Bet Championship.

“I know I can play a lot better, but it’s just nice to be back out there again,” said Williams, who has had two shoulder operations in the last two seasons after battling back from a broken leg and other nasty injuries earlier in his career.

“My two shoulder injuries have been very unfortunate. It’s not as if I’m a rugby player, but of course you use your shoulders a lot in football.

“It was hard to get back from them. But I feel fine now, I’m pinned in and I’m ready to go.

“The last couple of games are something to build on and hopefully I can stay fit.”

Williams was hailed as a star of the future when he emerged at Crystal Palace and the late Wales manager Gary Speed called him into his senior squad at the age of 17.

But lengthy spells on the treatment table curtailed his progress and loan spells at Ipswich, Nottingham Forest, MK Dons and Sunderland failed to spark his early promise.

It was not until Williams arrived at Charlton in January that his career began to move in an upward trajectory again, helping the Addicks win promotion through the League One play-offs.

“I feel at home there,” Williams said. “They welcomed me from another south London team and I wasn’t sure how that would go down at the start.

“But I’ve loved my time there and we’re flying.

“The staff who’ve put the team together with all the problems behind the scenes have done a fantastic job.

“It’s probably the best togetherness of a team I’ve been involved in at club level.

“The manager (Lee Bowyer) has helped to take me to the next level and work on my weaknesses. He was a big reason why I decided to stay this season.”

Williams won his 19th cap against Belarus, six and a half years after his first in a 2-1 World Cup qualifying win away to Scotland.

It was the 25-year-old’s first start since he lined up in the opening game of Euro 2016 against Slovakia in Bordeaux.

“I knew if I was in the Championship I was going to get a better chance of being back in the Welsh fold,” Williams said.

“I feel at home in the Championship as I’ve played most of my career there.

“It’s a tough league, where everyone beats everyone.

“But hopefully I can play as many games as I can this season and work on my form in a Welsh shirt.”