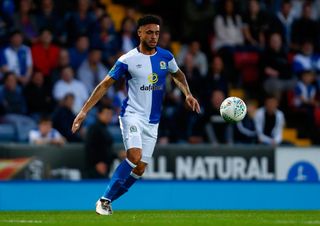 The left-back rose highest to convert Stewart Downing’s free-kick in the 62nd minute and secure Rovers their third consecutive win over the Tigers.

Hull forward Jarrod Bowen missed a penalty, with Christian Walton producing a fine save in the 12th minute, before the woodwork was hit four times during a thrilling first half.

Winger Kamil Grosicki fired against the post for the Tigers, as did Rovers counterpart Downing, while visiting midfielder Bradley Johnson hit the bar twice.

Johnson was at fault for the early spot-kick, bringing down Jackson Irvine in the box with a clumsy tackle, but Walton guessed correctly and superbly beat away Bowen’s well-struck effort.

Rovers summer signing Johnson almost made up for his error at the other end, only to see his header clip the frame of the goal.

Hull came again and a well-worked move down the left ended with Daniel Batty curling an effort over the top when well placed on the edge of the area.

As the game opened up, City goalkeeper George Long had to be alert to race out and deny Adam Armstrong when the striker latched onto a perfectly-weighted through ball.

After Irvine scuffed a tame shot just wide, the influential Grosicki had two big chances in a matter of seconds.

Firstly, the Poland international rattled the post with a piledriver of a half-volley and, after the ball found its way back to him, curled an effort just wide with Walton beaten.

The woodwork then came to Hull’s rescue twice in the space of four minutes as Rovers ended the first half strongly.

Downing fired a low left-footed shot across Long and against the far post before Johnson was denied for a second time, hitting the bar again with a curling effort from distance.

Batty was off target again for Hull on the hour mark, shooting just wide from distance, but it was Rovers who took the lead shortly after when Williams nodded home Downing’s inviting set-piece.

Hull boss Grant McCann threw on Josh Magennis and Josh Bowler in an attempt to grab an equaliser, with Grosicki continuing to look their most likely provider.

Yet the hosts had to be careful of Blackburn catching them on the break and Downing fired in a low drive that was comfortable for Long, who then dived at the feet of Greg Cunningham.