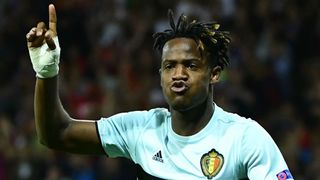 Marc Wilmots has confirmed that Michy Batshuayi left Belgium's Euro 2016 base this week to undergo a medical ahead of his expected move to Chelsea.

The Marseille striker, who scored in Belgium's 4-0 last-16 demolition of Hungary on Sunday, is widely reported to be edging closer to a switch to Stamford Bridge after netting 17 Ligue 1 goals last season.

And the 22-year-old was given special dispensation to attend a medical.

"He did not ask for my advice," said Wilmots. "Marseille just asked me to release him for two hours for a medical visit between 10am and noon. That's all."

Full-back Thomas Meunier is also said to be on the verge of a transfer from Club Brugge to Paris Saint-Germain.

"I think it's best that the players are busy with transfers," added Belgium coach Wilmots. "This shows that they have worked well.

"They were given a free afternoon yesterday and some took the opportunity to move forward on the transfer issue. It's good to solve these problems.

"If a club like PSG is interested in Meunier it is because they have seen his qualities. They are not blind."

Belgium face Wales in their Euro 2016 quarter-final on Friday.