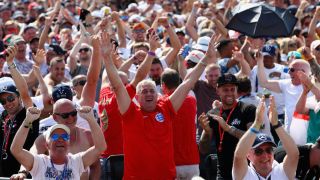 The All England Club insists the scheduled time for the Wimbledon men's singles final will not change if England reach the FIFA World Cup final.

After Gareth Southgate's side booked a semi-final tie against Croatia, which will take place in Moscow on Wednesday, calls have grown for Wimbledon to adjust the start time for the men's final.

The Centre Court showpiece is currently slated for 2pm GMT on Sunday, meaning it would be highly likely to clash with the World Cup final, kicking off at 4pm.

"We have said for a couple of years that the final will be played at 2pm, as it is every year," Richard Lewis, the chief executive of the All England Club, told BBC Sport.

Yorkshire County Cricket Club have rearranged their Vitality Blast T20 fixture against Derbyshire, which was scheduled to clash with England's last-four tie against Croatia.

Dear please reschedule the time for Wed T20 v Derby so we can all watch football come home.Kind Regards,Everybody in Yorkshire & Derbyshire. July 7, 2018

In a statement, Yorkshire said "the decision has taken into consideration travel advice for the Headingley area on Wednesday night."