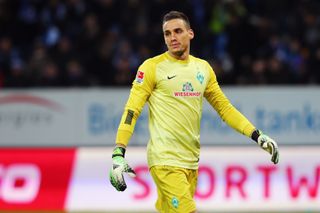 Wolf has stepped in for the under-pressure Sebastian Mielitz for Bremen's last four Bundesliga fixtures after the 24-year-old conceded 26 goals in 14 appearances in all competitions.

And it now appears that former Kapfenberger stopper Wolf has done enough to keep his place between the posts on a permanent basis.

"It was a very tight race in which we have now made a decision that we are happy with," Dutt is quoted as saying by Sky Sports.

"Raphael did a good job in his four games before the winter break and he has confirmed this impression during training.

"Therefore, we have decided to keep our faith in him."

Mielitz, however, has been left dismayed by the decision, adding: "I am very disappointed no longer to be number one of my club."