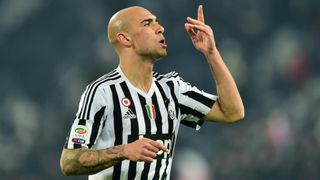 Wolfsburg are ready to turn their attentions to Juventus attacker Simone Zaza after missing out on Netherlands striker Vincent Janssen.

The Bundesliga side are keen to add some more firepower to their squad ahead of the 2016-17 campaign and had made Janssen their main transfer target.

Janssen opted to leave AZ for Tottenham, though, meaning Wolfsburg have to explore other options. They are keeping a close eye on Borja Mayoral at Real Madrid, but sporting director Klaus Allofs has made it clear that Zaza is an option as well.

"We have known about Janssen's decision for a while," Allofs told Kicker.

"Zaza could be an option for us.

"But we will have to wait and see whether that is realistic."

The striker was part of the Italy squad that was eliminated by Germany in the quarter-finals at Euro 2016, missing from the spot during the shoot-out.