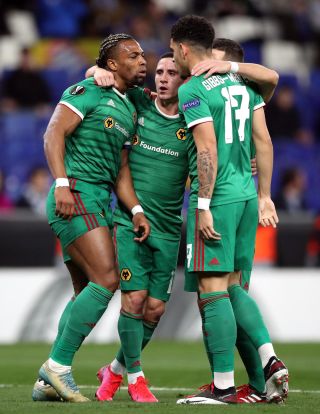 Jonathan Calleri’s hat-trick failed to end Wolves’ Europa League dream as they reached the last 16 despite defeat at Espanyol.

Former West Ham flop Calleri hit three to earn the hosts a 3-2 win in Barcelona on Thursday, as Wolves progressed 6-3 on aggregate.

Adama Traore and Matt Doherty netted for the visitors, who now wait for Friday’s draw to discover their next opponents, even after suffering their first away defeat in Europe this season.

There was a brief disturbance early in the second half when police and stewards removed a small group of fans from hospitality seats, but despite there being Wolves supporters in the home areas it was only a minor flashpoint.

On the pitch, Nuno Espirito Santo’s side rarely looked in danger of blowing their commanding 4-0 advantage from the first leg at Molineux.

The boss had the luxury of being able to rest hat-trick hero Diogo Jota and Ruben Neves completely while handing a full debut to £21million January buy Daniel Podence.

Espanyol fans turned their backs on the team with the RCDE Stadium barely a third full and the club prioritising their LaLiga survival fight over the last-32 tie.

But after a sedate opening 15 minutes, the hosts gave themselves hope of an improbable comeback.

Neither side had threatened before Espanyol strung together a flowing move down the left and Adria Pedrosa crossed for Calleri to finish from close range with the game’s first shot on target.

The lead lasted just six minutes, though, as Traore levelled.

The wideman, playing as a central striker, was picked out by Podence and Fernando Calero blocked his initial shot.

Yet the ricochet fell kindly and Traore squeezed a second attempt beyond the grasp of Andrea Prieto from six yards.

The tie was over as a contest with the hosts needing to score five, but Espanyol – five points from safety at the bottom of LaLiga – kept their belief.

Podence shot over at the start of the second half before Max Kilman gave the home side another lifeline after 55 minutes, when he was penalised for a high foot on David Lopez in the box and Calleri sent Rui Patricio the wrong way from the spot.

Morgan Gibbs-White, making his first start since October, fired over, but Wolves barely threatened in the second half.

Espanyol pressed but their purpose waned as time began to run out and Wolves levelled for a second time when Podence’s low cross was converted by Doherty with 11 minutes left.

Pedro Neto then spurned a glorious late chance when he astonishingly shot wide of an open goal after rounding Prieto.

It was left to Calleri to wrap up the scoring in stoppage time and win it on the night for Espanyol when he headed in to complete his hat-trick.