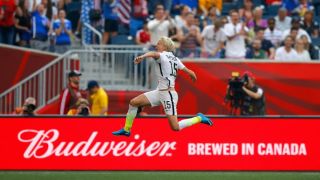 On a high-scoring day in Canada, two of the four matches on Monday saw six goals scored, while Megan Rapinoe notched a brace in USA's 3-1 victory over Australia.

But Japan, who defeated USA on penalties to lift the 2011 World Cup, needed just one goal to overcome Switzerland.

A contentious penalty saw the title-holders overcome the Swiss 1-0, with goalkeeper Gaelle Thalmann judged to have fouled Kozue Ando in the process of saving the Japanese striker's shot.

Aya Miyama converted the spot-kick in the 29th minute.

Spectators in Winnipeg were treated to 10 goals in their double-header as Sweden were held to a 3-3 draw by Nigeria before USA triumphed.

In an end-to-end encounter, USA opened the scoring in the 18th minute when Rapinoe's effort deflected past Australia goalkeeper Melissa Barbieri.

Australia responded just before the half-hour mark when Lisa De Vanna completed a flowing move with a fine finish, with the captain scoring in her 100th match for the Matildas.

But the Americans were too clinical in the second half with Christen Press and Rapinoe scoring to wrap up the three points.

In the earlier match, Sweden led 2-0 just after the half-hour mark but the youthful Nigerians dragged themselves level just after the break with Ngozi Okobi and Asisat Oshoala scoring within four minutes of each other.

Linda Sembrant put Sweden ahead in the 60th minute but Nigeria deservedly claimed a point after Okobi picked out Francisca Ordega's run and the latter slotted her shot between the legs of goalkeeper Hedvig Lindahl.

There were also six goals scored in the opening match in Vancouver, with Cameroon arriving at the World Cup in style.

Cameroon scored three goals in each half against fellow World Cup debutants Ecuador with Gaelle Enganamouit registering a hat-trick, while the South Americans had to play the final 24 minutes with 10 players after Ligia Moreira was sent off.

Three of Cameroon's goals came from the penalty spot.