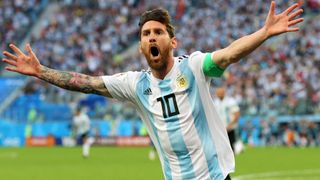 Lionel Messi scored what could prove to be his last World Cup goal on a night of unforgettable drama in St Petersburg this week.

The raucous din supplied throughout by the Argentina fans and Marcos Rojo's thrilling late winner made the Group D match against Nigeria the unquestionable highlight of the past seven days.

Elsewhere, Omnisport took in a museum exhibition presenting football heroes as royalty and military men of the Renaissance era, while England remained in high spirits up the road in Repino – arguably because they keep beating the media at darts.

Locals here enjoyed Russia's shock penalty shoot-out win over Spain as you might expect, but a power cut nearly stopped the party before it had begun.