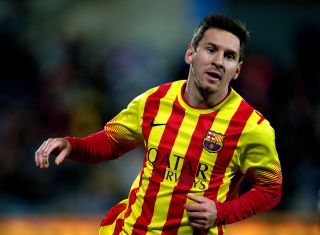 After the Argentina international spent the last six weeks of 2013 on the sidelines with a hamstring strain, Messi made his return for Barca following the mid-season break and has scored four goals in four games, all against Getafe in the Copa del Rey.

Barcelona are battling for honours in La Liga, the Copa del Rey and the UEFA Champions League, but Messi concedes that the World Cup in Brazil is proving too difficult to ignore.

"Though there are a still a few months left and it seems quite far away, it'll be on us before we know it," he told FIFA.com.

"But we've got lots of important challenges before that: the (UEFA) Champions League, trying to retain the La Liga title, the Copa del Rey.

"We're taking things one step at a time but, to tell the truth, the World Cup's on all of our minds already."

Messi has played in the last two World Cups and the 26-year-old believes 2014 could be the year that Argentina are crowned champions for a third time.

"It might just be our year but once the World Cup starts anything can happen, it's very difficult," he added. "But I do think that we're in good form.

"World Cup games are totally different. Right from the off, the atmosphere and the build-up make it different to any other competition.

"While the Champions League is great, the World Cup is special."