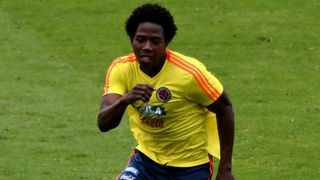 Carlos Sanchez acknowledges Colombia face a tough challenge living up to expectations at the 2018 World Cup after flying under the radar four years ago.

After a 16-year absence from the tournament, Colombia reached the last eight for the first time in their history in Brazil.

They topped Group C before seeing off Uruguay at the start of the knockout stages and, while the hosts ended their run in the quarter-finals, Jose Pekerman's squad received plenty of plaudits for their performances.

Fast forward to this year's event in Russia and Colombia are no longer an unknown quantity, increasing the pressure on the players, according to Espanyol midfielder Sanchez.

"I think this World Cup won't be the same as the last one," he told the media.

"We got to the last World Cup without having been in one for 16 years and people really didn't know us that much. Now, however, that has changed.

"This World Cup could be harder in that sense, but we're working really hard to get the results we want and if we want to go through we have to be ready for that."

In our collection we have goalkeeper 's signed shirt from the 2014 in which, at 43, he became the oldest player to ever play the tournament.At 45, will surpass this record if he steps onto the pitch today at vs  June 15, 2018

Colombia begin their campaign in Group H against Japan on Tuesday in Saransk, followed by games against Poland and Senegal.

The South American nation are favoured to top the table, but Sanchez is adamant they will not be taking anything for granted in their bid to reach the latter stages again.

"No, we don't feel we are favourites," he added. "We arrived here with confidence.

"We trust our team, but we don't feel ourselves favourites. I think that would be a mistake.

"We came here in a very humble way, we are preparing our first game against Japan, and I've said it before, we're working hard to face a strong team and we will go that way game by game."