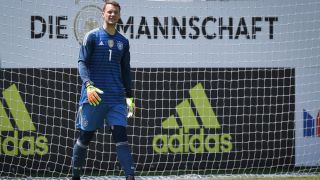 Manuel Neuer is the world's best goalkeeper and his return to training was incredible, according to Germany defender Niklas Sule.

But the shot-stopper is making a timely return for Germany, who included Neuer in their preliminary squad for their World Cup defence.

Sule was impressed by what he saw from Neuer in training ahead of the goalkeeper's return against Austria in a friendly on Saturday.

"At first I couldn't believe it, when Manu did his first training after four months out and sensationally saved one ball after the other. It was as if he had never left," he said on Wednesday.

"I hadn't witnessed something like that before. His body language is simply incredible.

"He is the best keeper in the world, and for me it is great to play with him at the Bayern and cause him problems by shooting my swirling shots on goal."

More match practice this morning for , who played 60 minutes for the U20s against the first team.And he made some fine saves too  May 30, 2018

Neuer is Germany's undisputed number one if fit, which would leave Barcelona goalkeeper Marc-Andre ter Stegen on the bench.

"The coaches Jogi [Low, head coach] and Andi [Kopke, goalkeeping coach] talked to Marc-Andre, who had a very good season and is an important part of the team since the Confederations Cup last year and who got even better this year," he said.

"But Manu is a complete goalkeeper. His name, the way he moves, his presence on the pitch and his technical skills. He has been named the world's best goalkeeper for a reason.

"Of course it is no easy situation for Marc now, but when you have such a unbelievably good goalkeeper in your team like Manuel, you want him to play."