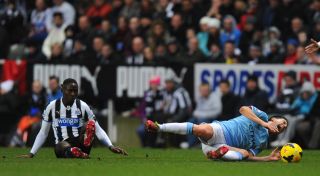 The Newcastle United defender hacked down the Manchester City midfielder in the second half of his side's 2-0 Premier League defeat, with City boss Manuel Pellegrini claiming he should have been shown a straight red card for the challenge.

It was initially feared the 26-year-old may be out for several months with a medial ligament injury in his knee, but it has since been confirmed that the 26-year-old will be sidelined for around eight weeks.

"I was waiting to meet him in front of the changing-room door but he got treatment," Yanga-Mbiwa told L'Equipe. "Then, I immediately tried to get his phone number. I called him several times but he never answered.

"I left a message, I tried again on Monday but I failed to talk to him. I will try again because I want to apologise personally. I was so sorry.

"I just wanted to prevent him from going ahead, make him fall. He stayed upright on the first tackle, but fell on the second one.

"But I clearly didn't want to hurt him or be violent with such a gesture. I wanted to trip him up, there was no nastiness."

And Yanga-Mbiwa admitted his relief that the injury would not rule Nasri out of the 2014 FIFA World Cup.

"I finally heard it should be a two-month absence and I was relieved," he added. "When I heard it could be broken knee ligaments and it could imperil his World Cup, I felt really bad."