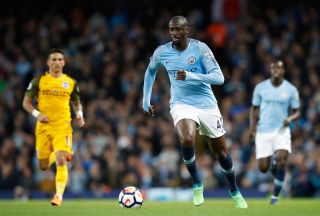 Yaya Toure has announced his retirement from playing and is set to launch a coaching career, according to his agent.

Toure’s agent Dimitri Seluk has been quoted by Russian website Sport 24 saying the 35-year-old former Ivory Coast international has made the decision after having his contract at Greek club Olympiacos terminated in December.

Selcuk said: “Yaya has decided to end his career as a champion.

“The farewell match which Manchester City gave him was, in principle, the real end of his playing career, not only in that team, but in general.

“Yaya is one of the best players in Africa and had one of the brightest careers in the history of African football, so should leave football at its peak. We talked for a long time on this topic.

“Of course every footballer wants to play as long as possible and in terms of his physical condition Yaya could do this at a sufficiently high level for another five years.”

Selcuk said Toure, who also won the Champions League with his previous club Barcelona, decided to end a brief association with Olympiacos after they reneged on a promise to give him a coaching role.

Selcuk added: “I’m sure that two years after Yaya gets the Pro coaching license, he will head one of the serious clubs and achieve great success in the coaching field. Now he has already begun to take steps in this direction.”