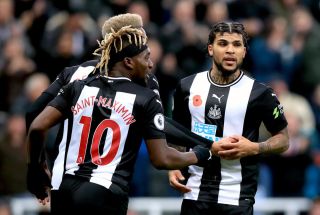 DeAndre Yedlin has hailed the efforts of Newcastle’s strikers despite the fact they have scored only one goal between them so far this season.

Joelinton’s winner at Tottenham at August 25 remains the £40million summer signing’s sole strike since his arrival from Hoffenheim, while Frenchman Allan Saint-Maximin is also yet to open his account.

Paraguay international Miguel Almiron has now gone 22 games without a goal since his £21million transfer from Atlanta United in January.

Indeed, seven of the club’s last nine goals have come from defenders with Yedlin and Ciaran Clark, who is joint-top scorer with midfielder Jonjo Shelvey on two, firing the Magpies to a 2-1 Premier League victory over Bournemouth.

However, the 26-year-old United States international said: “A lot of people look at the attackers and think, ‘What are you doing?’. But what a lot of people don’t realise is the defensive work that strikers do for us.

“They make the game a lot easier for us with their pressing and the way they push. They are doing a lot of the dirty work and deserve the credit as well.

“It goes a bit unnoticed, but it’s a massive help for us.”

It was Yedlin’s ability to get forward from right wing-back which dragged Newcastle back into Saturday’s game as he cancelled out Harry Wilson’s opener for the visitors with a spectacular diving header – the goal surviving scrutiny from the video assistant referee.

Asked about his initially muted celebration, he said: “Nobody wants to look stupid by celebrating an offside goal, but at the end of the day, it counted.

“I just did what I had to do to get the ball in the back of the net. I know when Allan Saint-Maximin has the ball in that situation and he’s coming back to shoot, I need to take a gamble and come in.

“I didn’t know if it was on target, but I might as well make it on target. I didn’t really know much about it at first and I didn’t hear the crowd react, so maybe I thought it was offside.

“It went to VAR and fortunately, it counted.”

Clark’s close-range 52nd-minute strike ultimately won the day, but Yedlin’s effort – his third for the Magpies and his first at St James’ Park – proved a fitting way to atone for his error in the build-up to Wilson’s goal.

He said: “I was supposed to be on Josh King for that one, so it was good I scored to make up for it. I lost concentration on that, but it happens and that’s why you have team-mates around you.”