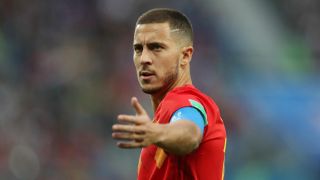 Hazard starred in Belgium's run to the semi-finals of the World Cup, but he could not find a way through France's fearsome rearguard in the last four.

The Chelsea forward has been regularly linked with a switch to Madrid, those rumours growing in the wake of Cristiano Ronaldo's shock switch to Juventus.

Hazard himself has appeared to welcome such speculation, describing Los Blancos as a "dream", with Martinez seeming to give his backing to the attacker joining Madrid ahead of Belgium's third-place play-off against England on Saturday.

"It's a very easy question for me, he is one of the most complete footballers in the modern game now," Martinez told reporters of Hazard. "Everyone speaks about footballers and about what they can do on the pitch, and rightly so it is very easy to assess what Eden Hazard does on the pitch.

"He's one of the best footballers in one-v-ones, brings an understanding of how to break defensive systems down, he's got an incredible coordination right and left. The biggest aspect I can tell you that not many people know is his incredible personality and leadership.

"He leads in the box and in scoring goals. He never drops his standards, he's a team player with a winning mentality and he can play for any demanding club in the world. Now, with the maturity that he has, you can build a winning project around him."

7 - Romelu Lukaku has now scored more goals in World Cups and European Championships than any other Belgium player in history. Finisher. June 23, 2018

Romelu Lukaku could win the Golden Boot at his first World Cup, although the Manchester United striker will face England with a two-goal gap to make up on Three Lions skipper Harry Kane.

While France forward Olivier Giroud has reached the final without scoring a goal and other attackers such as Gabriel Jesus had underwhelming tournaments, Martinez backs Lukaku's claim to be Russia 2018's top striker.

"It's a difficult question because it is normal for me to be biased, I work with Romelu and I worked with him when he was 19," Martinez said. "I've seen an incredible, incredible journey in his career.

"I always said that Romelu is a striker who can do everything, with the power and the pace and running in behind. He's developing his hold-up play and he can be strong in the air. And then his biggest attribute is that he's a goalscorer, a finisher, and if you look at his numbers they are very very difficult to reach.