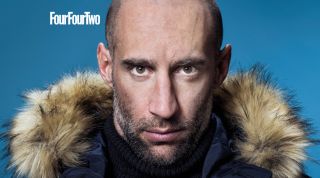 The popular Argentine has become an adopted Mancunian over almost a decade in the north-west, where he has won two Premier League titles, two League Cups and the FA Cup since arriving from Barcelona-based Espanyol in summer 2008.

And the 32-year-old is now so settled in England that he admits to missing the gloomy Manchester weather whenever he visits warmer climes on holiday.

Speaking exclusively in the March 2017 issue of FourFourTwo magazine, Zabaleta says: “This place has definitely changed me. When I go on holiday to Spain for a month in the summer with the family, or somewhere with more sunshine, I find that I miss all the rain in Manchester. It sounds crazy, but it’s true.

“I’ve been here for many years. In terms of playing football in another country, like Spain, and training in a hot climate – I think I’d find that hard. I love playing games in the rainy weather when the ball runs fast on the pitch.”

Zabaleta’s ability to adapt to change perhaps explains why he has been able to last at the Etihad Stadium outfit for so long while other South Americans, such as Robinho and Elano, have moved on within a couple of years. The former San Lorenzo man says a determination to prove himself each year has been key, too.

“My commitment and loyalty has been there on and off the pitch from day one – that’s why I think I have lasted,” the Argentine says. “At the beginning everything is new and you have to adapt to a new style of football and life off the pitch, which isn’t easy. Sometimes you struggle a bit, but I’m happy to still be here.

“The Premier League was always my dream. It’s amazing. I thought, 'Let's go to England' – Manchester City was a different club to what it is today but it’s still the same in many ways. It’s been a big challenge every year to prove that I’m good enough to be here as big money and big players come to the club.”

Read the full interview with Pablo Zabaleta in the March 2017 issue of FourFourTwo magazine. A South American special, we head round to Ronaldinho’s house to hear what the Brazilian trickster is planning next, reminisce with former Real Madrid forward Robinho and meet up with Bayern Munich enforcer Arturo Vidal. Plus, we find out why Oscar swapped Chelsea for China, look back on the early days of Diego Maradona’s career at Argentinos Juniors, learn that West Bromwich Albion powerhouse Salomon Rondon doesn’t actually like heading, hear some remarkable tales from football’s own Forrest Gump, aka Nelson Vivas, and find out how Chapecoense go about healing a club and local community following November’s plane tragedy in Colombia. Order this issue now, and then subscribe here!