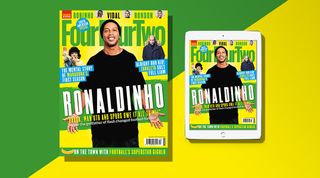 When we started planning this South American special in September last year, we wanted to celebrate everything we love about the spiritual home of football.

We knew that we wanted Ronaldinho to front it after a number of young players interviewed over the past 18 months named the former Brazil star as their hero growing up. His quick feet and joie de vivre had clearly inspired a generation of flip-flapping forwards, so who better to represent the carnival spirit of this issue?

Then we heard the news about Chapecoense and our plans were put on hold as the football world, particularly in South America, came to terms with the scale of the tragedy. We discussed postponing the issue indefinitely and scrapping it altogether. It was only after the Brazilian club made it clear they wanted to look forward and begin planning for the new season that we felt comfortable proceeding. But not before we travelled to Chapeco to speak to players, club officials, staff members and families of those affected about rebuilding their lives, the club and local community. This issue is dedicated to them.

In November 2016, a plane carrying Chapecoense crashed, killing most of the players and staff. FFT talks to those trying to heal the club and local community.

His constant desire to entertain made him football’s ultimate cult icon. Now, Ronaldinho invites FFT over to his place to explain how he inspired the new generation, what he’s planning to do next, and why he wishes he was Dele Alli...

Uruguayan second-tier side Deportivo Maldonado average crowds of less than 350 but are vying for the hottest South American starlets with the world’s richest football clubs. But how?! FFT investigates...

He’s a big fan of Oasis, learned English watching Corrie and even enjoys the rain. It’s clear the Manchester City defender loves life in his adopted home – but Blackpool Illuminations on the other hand...

Long before promising Argentine talents were being labelled ‘the new Maradona’, there was the actual Maradona. Forty years on from his Argentina debut at just 16 years old, FFT takes a look back at the early days of Diego’s career.

Bayern Munich’s enforcer may have a fierce reputation but, as FFT discovers, he’s actually a fan-friendly pussycat with a business head for his horses...

Venezuela may not have as rich a football history as Colombia or Brazil, but one man – West Brom striker Salomon Rondon – is fighting to change that.

Former Manchester City and Milan trickster Robinho answers your questions in this month’s One-on-One, including: Was it tough being ‘the next Pele’? Why did his move to Chelsea fall through? Did he really get the bus around Manchester?

Former Chelsea midfielder Oscar discusses his move to China and the prospect of breaking back into the Brazil national team. Plus, Matt Le Tissier talks FFT through his greatest goal, Julio Baptista remembers the games that changed his life and Jeff Stelling reveals the least believable thing about Chris Kamara.

Rory Smith focuses on British managers in this month’s Talking Point, and why bosses need to adapt to the real world.

Meet Uruguay’s superstar gigolo. Jose Andrade was the Pele of his day, but the 1930 World Cup winner’s love of the high life would lead to rack and ruin.

FourFourTwo Performance speaks to Arsenal starlet Alex Iwobi, who’s got advice on how to add style and swagger to your game. Plus, Marouane Fellaini offers his tips on how to score more headers, and Tom Cruise’s personal trainer reveals what he's been doing with Victor Anichebe to get the Sunderland striker in A-list shape.

Grab it now: available in print, and on iPad and iPhone from Wednesday, February 1. Subscribe to FourFourTwo here!