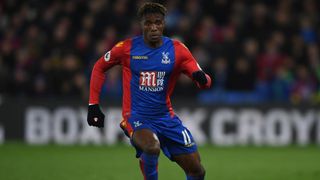 Zaha, 24, was linked to Tottenham before committing his future to Palace, the club he came through as a junior prior to a brief stint at Manchester United.

The Ivory Coast international has made 258 appearances for Palace and hopes the club can take a step forward next season.

"Palace is in my heart and I don't think the story is over. I spoke with Steve [Parish, chairman] and I think I still have more to give this club," Zaha said.

"The supporters have been amazing and I want us to do more than just stay in the league next year.

"I would like to thank the chairman for being a big part of my journey and his fellow owners for backing me and rewarding my progression. Let's do this."

Zaha has been Palace's Player of the Season the past two campaigns, having helped the club retain their Premier League status.

On the re-signing, Parish said: "Wilf has been with the club since he was eight years old and in the first team from the day I arrived.

"He is our talisman and someone that week in week out gives everything for the red and blue.

"I'm delighted he has committed his future to us and look forward to climbing up the table with him next year."