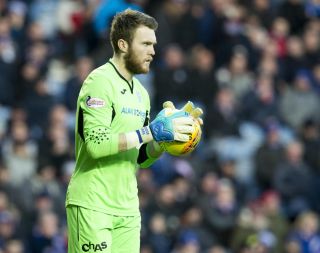 Manager Tommy Wright made that point as he expressed his frustration at the club’s failure to bring in any new players so far this month.

Saints have allowed Ross Callachan to move to Dundee and sold Matty Kennedy to Aberdeen but are set to host Ladbrokes Premiership leaders Celtic on Wednesday without any reinforcements.

Clark said: “It is always good to bring in fresh faces and it brings more competition for places.

“With the quality of players we can bring in, the boys know that they need to be right on their game to retain their place in the team.

“And if you bring in new faces, it adds that bit of freshness as well.

“You start to up things a bit more to make sure you’re definitely in that starting squad.”

Wright had been denied the opportunity to bring in an experienced defender as Saints struggled in the autumn months, but their form has been good since a defensive reshuffle which saw the fit-again Liam Gordon and experienced left-back Callum Booth brought in.

Saints have only conceded three goals in eight games and lost once in that period, with Saturday’s 2-1 win over Kilmarnock taking them five points away from the bottom two.

“The boys are all confident,” Clark said. “We are coming off the back of a good result at the weekend, one where we had to dig in deep to get.

“We controlled the game for large spells and it gives us a boost going into Wednesday.

“We need to make sure we have the same sort of performance level that we had at the weekend. We need to be brave on the ball, try and retain possession and try and make the pass in the build-up play count.

“We need to make sure we are solid in defence again and takes chances when we create them.”