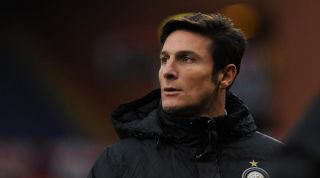 Moratti sold a 70 per cent stake in the San Siro outfit to Erick Thohir last year, with the Indonesian businessman being elected president in November.

However, Moratti - now in an honorary position - feels Zanetti could have risen to the top of the club under the former regime.

"With me, Zanetti knew for sure that he could even have become president," he is quoted as telling Telelombardia.

"Because I might have thought about naming as president someone who knows everything, someone who represents Inter, who's respected and who has the right image. And who could perhaps give interviews instead of me in the morning!

"There's been a change for him now, there's a new person who obviously couldn't know him as well. But I think he's sounded things out, also because Thohir is smart.

"Zanetti will stay at Inter and he'll definitely have a position which, in my view, must be an operative role and not just a representative one.

"He's the sort of person who knows how to manage situations, just as he's managed his personal life well with the PUPI Foundation and other things that are very important.

"He's managed his family life extremely well, his investments, his life at Inter.

"I think he'll definitely be an excellent director and that's what they'll get him to do."

Zanetti, 40, has made nine Serie A appearances for Inter this season.