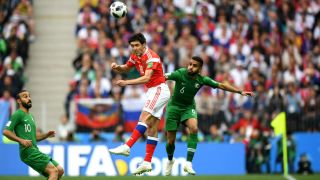 Russia midfielder Yuri Zhirkov has retired from international football, saying he "does not have enough energy to play at this level".

The 34-year-old was a stand-out performer as the World Cup hosts defied gloomy pre-tournament predictions to reach the last eight before bowing out to Croatia on a penalty shoot-out, a match Zhirkov missed due to concerns over a calf injury.

And he says now is the right time to take a step back having won 87 caps for his country.

He said: "I do not have enough energy to play at this level.

"The latest injury was the final signal. I've had no time for my family and children and this was another summer without a vacation.

"I would like to thank everyone who I played with, all the coaches, our fans and of course my family, who persuaded me to stay in the team long enough play to play at the World Cup. I am proud that I was lucky enough to represent my country at two World Cups and two European Championships."