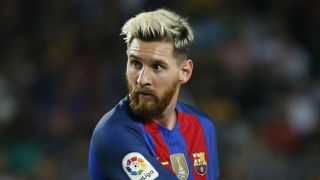 Real Madrid coach Zinedine Zidane believes Barcelona could suffer in the absence of Lionel Messi, while he is relaxed over the form and fitness of his own all-star forward line.

Messi suffered a groin injury during Wednesday's 1-1 draw against Atletico Madrid - a result that kept Barca three points behind Zidane's men at the top of LaLiga.

The Argentina star, who aggravated a similar problem while on international duty earlier this month, is set to be sidelined for three weeks.

"They are weakened, definitely," he told a pre-match news conference ahead of Madrid's trip to Las Palmas on Saturday. "Not too much, but Messi is Messi with what he brings to their side.

"Their side is definitely different when he is not there."

Zidane was able to field Karim Benzema, Cristiano Ronaldo and Gareth Bale together from the start for the first time in LaLiga this season as Villarreal earned a share of the spoils at the Santiago Bernabeu in midweek.

The trio's varying levels of form and fitness were in evidence, with Madrid particularly limp as an attacking force before half-time, but their coach is not overly concerned.

"They are in good shape," Zidane said. "They could be better, perhaps yes. They can all score goals and can all score two or three goals but I'm happy with the way they are working.

"What I can tell you is that in the last game I was not too happy about the first half from the whole team, not just one or two players

"But the team came together as a whole. It was a team problem in the first half."

On Ronaldo, Zidane added: "At 31 years of age he's still getting better. I don't like to talk too much about Cristiano or I would be here for half an hour or more.

"But I just want to talk about his motivation - he is completely motivated. Not all players are as motivated as him. It is a great virtue.

"They're in shape, they are getting stronger every day. It's true we demand a lot from them but they know the situation, they understand it and I'm very happy with them."