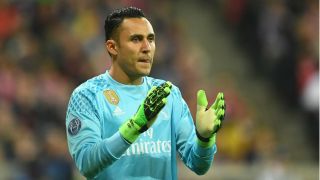 Zinedine Zidane highlighted Keylor Navas' importance to Real Madrid in the wake of their 4-1 LaLiga win over Sevilla on Sunday.

Navas showed his worth against Sevilla, though, as he made a number of fine saves to keep Madrid in front and Zidane was impressed with the shot stopper's performance.

"Navas has been - and still is - fundamental," Zidane said at a news conference.

"It was a deserved win. We started the game very well and then Keylor was very good."

This weekend's win saw Madrid move one step closer to the title, with four points from their last two games against Celta de Vigo and Malaga enough to dethrone Barcelona.

"It is not easy to win LaLiga," Zidane added.

"The good thing is that we are very switched on and very good physically. In every game we are playing for the league."