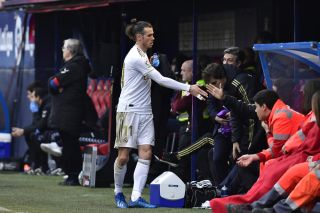 Zinedine Zidane says Real Madrid will count on Gareth Bale during the final months of the season after the Welshman started in the 4-1 win at Osasuna.

The former Tottenham attacker played for 71 minutes and was involved in Isco’s leveller in his first LaLiga appearance since January 4.

Further goals from Sergio Ramos, Lucas Vazquez and Luka Jovic extended Real’s lead at the top of the table over Barcelona.

Bale has largely had a bit-part role this season with injuries affecting him and constant talk of a strained relationship with his head coach.

“The problem is that they want us to have a problem with Gareth, but we do not have one.

“There are many players, it is not easy to manage all that, but in the end he is a very important player and little by little he will continue playing like the others.”

Even though Bale has been strongly linked with a move away from the Bernabeu in recent transfer windows, his agent Jonathan Barnett has hinted the 30-year-old will see out the rest of his contract with Real.

Zidane has used the Welshman sparingly at times, leaving him out of the recent derby with Atletico Madrid due to tactical reasons.

He also missed Thursday’s 4-3 home defeat to Real Sociedad in the Copa del Rey, but with a number of key games coming up, including the Champions League last-16 tie with Manchester City, the former Southampton player will be required.

Madrid boss Zidane added: “He has been well, he has given everything in attack and defence.

“He was a little short physically, hence the change. He will give us a lot from here until the end of the season. We will count on him.”

Isco impressed in Pamplona while substitute Jovic scored his second goal for Madrid since his summer move.

“You can tell him many things, but if he doesn’t score a goal, he’s not happy,” Zidane said of ex-Eintracht Frankfurt forward Jovic. “He has to improve, but I’m glad for his goal.”

Osasuna supporters may have been dreaming of a shock win when they took an early lead, but Madrid fought back to level through Isco before Ramos headed home in the 38th minute.

It remained 2-1 for a lengthy period of time until substitute Vazquez added a third with six minutes left and another sub Jovic fired home in stoppage time.

“The first falls to Isco and he puts it where he puts it,” Osasuna boss Jagoba Arrasate told Diario de Navarra.

“It may be a mistake but we are talking about world-class players. The second and the last two are stopped if we are more focused.

“We have to adjust things but the opponents of the last two matches are of a higher category.”