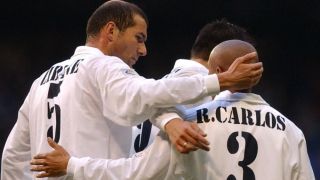 Former Real Madrid defender Roberto Carlos believes Zinedine Zidane will be a success at the club because the players will understand him better than Rafael Benitez.

Carlos, who made over 500 appearances for Madrid, played alongside Zidane in the club's first 'Galacticos' era.

The two won six trophies in their time as team-mates and Carlos praised Madrid president Florentino Perez for his "intelligent" decision to appoint Zidane in place of the sacked Benitez.

"Finally, Florentino with his intelligence has brought in Zidane," the former Brazil international told Radio Marca.

"He is a modern manager. He thinks like the players."

That way of thinking is why Roberto Carlos believes Benitez was doomed to fail at Madrid.

He added: "The players did not understand Benitez. With Zidane, I am certain Madrid will play better.

"It's the best decision from Florentino Perez. Zidane is not a coach, but he is a teacher."