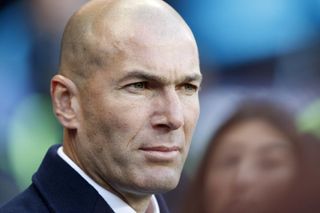 Real Madrid manager Zinedine Zidane insists his club’s Copa del Rey exit will not interrupt their LaLiga focus as they travel to Osasuna on Sunday.

Los Blancos’ hopes of winning a 20th Copa del Rey title were dashed after a 4-3 quarter-final loss to Real Sociedad on Thursday.

Zidane has turned his focus back to Real’s rampant league campaign, however, as they look to extend their unbeaten LaLiga run to 15 games.

“We’re not happy with our performance in the Copa del Rey game,” Zidane told the club website.

“We’ve all analysed it and the good thing is that we have another game three days on from that one. We’re fully focused on this match and on getting back to doing what we’ve been doing because we’re not going to throw everything that we’ve done up until now away on account of just one game.

“I’ve said in each of my last 21 press conferences that we haven’t won anything and nothing changes just because we’ve lost one game. We have to keep fighting until the end of the season.

“I, just like all of the players, have a game tomorrow and another one next week. Things keep going, nothing changes.

“We know what sort of game it’s going to be, it’ll be a tough match at what’s a tough ground and they’re tough opponents and are doing really well. We know the challenges we’ll face, but we’re ready to put in a strong performance and give our all. It’s yet another cup final for us”.

Osasuna manager Jagoba Arrasate is all too aware that his squad can afford few mistakes as they prepare to host the LaLiga leaders.

Twelfth in the table after winning just one of their past five matches, the Pamplona club now need to set aside the 2-0 defeat they suffered at the hands of Real in October as they face Zidane’s squad at El Sadar.

Though aware of the magnitude of the task at hand, Arrasate, who led the club to the top flight after promotion from the Segunda Division last season, was also keen to discuss the value of such a high-profile opponent to a home crowd.

“We know that it is the game of the year here at El Sadar,” he told the club website.

“It is a special game, to see if we can be close to getting the three points and achieving something that we know our people will love.

Arrasate expects Zidane to field a squad bearing little resemblance to the team that crashed out of the Copa del Rey on Thursday at the hands of his former club Real Sociedad.

“We are going to see Real Madrid of the League,” he said.

“Tomorrow we will see another Real Madrid, different from the cup. There are days they play with five midfielders that dominate you and other days they play you with pure extremes.

“We have to take into account those nuances, but keeping the hallmarks of this Osasuna because we understand that you have to attack to win, to play a perfect match and not to make mistakes.

“Because if you make mistakes against these teams you pay for it. We need the best Osasuna and the best Sadar to minimise that difference there may be.

“Although we are good, they are the best. They are the leader of the league for a reason.”