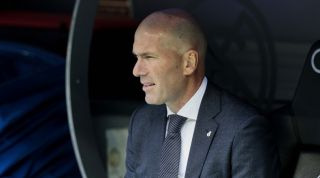 Deschamps led Les Bleus to World Cup glory at Russia 2018, and recently signed a new contract that will keep him in the job until 2022.

But that hasn’t stopped him from backing his former international team-mate to take over in the national hot seat in the future.

"The next coach could be Zizou," he told Le Monde (via Marca).

"At one point or another, it'll be him.”

The former Marseille, Juventus and Monaco boss has been in charge of France since 2012.

He refused to put a time frame on how long he is likely to remain in the post.

"When you're a coach there's no age limit," he said.

"It's the results that make you last."

Deschamps led France to second place at Euro 2016 before their triumph at last year’s World Cup, which made him just the third man to win international football’s biggest prize as a player and coach, having done it in 1998.

France face a huge challenge at Euro 2020 next summer, after being drawn in a group of death alongside holders Portugal and 2014 World Cup winners Germany.

They will be joined by the winner of the Nations League A play-off, which will be one of Iceland, Romania, Hungary or Bulgaria.

QUIZ! Can you name every Arsenal player with 10+ Premier League goals?

ANALYSIS No, Liverpool's new signing Takumi Minamino has not just been 'bought for shirt sales'