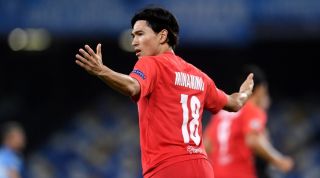 Anyone who paid attention to this year’s Champions League group stage will know exactly how good a player Takumi Minamino is. They'll also appreciate just what a smart deal Liverpool are getting by activating his Red Bull Salzburg release clause, thought to be in the region of just £7.5m. Salzburg’s campaign may have have been headlined by Erling Haaland and US coach Jesse Marsch, but Minamino showed himself to be the kind of skilful, tactically aware attacking midfielder that almost any side in Europe could find a home for.

What his precise role at Anfield will be remains to be seen, but he’ll presumably compete with Adam Lallana and Alex Oxlade-Chamberlain as another midfield understudy, possibly also reinforcing the forward positions at the same time.

Before those more practical matters, though, an old chestnut to attack: the assumption that every Asian player joining an English club arrives purely for the sake of transporting commercial benefits in their home country.

This trope has been embedded in English culture for a long time. In fact, those who remember Sky One’s Dream Team, which followed the fortunes of fictitious Premier League side Harchester United, will remember a plotline featuring an Asian player signing for that specific purpose, who quickly became alienated from the squad because of his lack of footballing ability.

The examples are no less troubling in real life – and Junichi Inamoto, of course, is right at the top of that list. When the Japanese midfielder signed for Arsenal in 2001, Inamoto was presented as a Japanese David Beckham and his transfer as a form of commercial subterfuge. In the words of the BBC’s Phil McNulty, reporting in July 2001:

“Arsenal, so it was said, only had to sit back and watch the Yen roll in as upwards of 100,000 Inamoto shirts were sold. And Wenger himself could happily count the cash from internet rights and the sale of reserve team matches to Japanese television.

"At least that was the theory.

"But in Japan, Wenger's move is seen more as move to take advantage of a reasonably priced transfer market, and a move to take a chance on a promising young player.”

The Clasico used to feel like a battle over how football should be played. Not any more

One of the other details left out at the time was that, even within his homeland, Inamoto just wasn’t particularly famous. As part of his article, McNulty drew on the local knowledge of the World Service’s Guy de Launey, who described a very underwhelmed reaction: "I have been out on the streets here in Japan and the people I spoke to were not that aware of Inamoto. He is not that big a star over here and he was with a team that has never won the championship. Inamoto is by no means a superstar here.”

Inamoto was not successful. Nor was Akinori Nishizawa, who had joined Bolton on a year's loan the month before Inamoto arrived and didn’t make a single Premier League appearance in 12 months. He scored a late winner against Walsall in the league cup, but even YouTube doesn't remember that.

In both cases adaption proved difficult, but the demands of English football were too much for most foreign players, irrespective of where they came from. Different nationalities have always struggled with different aspects of the culture, including the food and weather, but anyone who moved into the British game in those days seemed to suffer with the speed and physicality.

Yet the tag has always stuck – particularly to Inamoto, who remains entwined with this fallacy that clubs will, with the right opportunity, use Asian players purely for the sake of infiltrating specific markets. It's been a cruel habit, often making mockeries of otherwise respectable careers. What seems really strange, though, is that the accusation is so rarely levelled at players from any other region. Particularly as modern football has never met a marketing angle it hasn't tried to exploit. Americans have suffered it in the past, certainly, Christian Pulisic is probably one of the first not to, but it’s bizarre for an enterprise as global as Premier League football to be so narrow in its prejudice.

Why were Celtic and Southampton not seen to have signed Victor Wanyama for the commercial pipeline he provided into his native Kenya? Why, when Arsenal bought Pierre-Emerick Aubameyang, was part of the conversation not dedicated to what Stan Kroenke might be able to achieve with the mineral wealth of Gabon? We know the answer, of course, but the comparison still exposes what a nasty little habit this continues to be.

It's also something discussed eloquently in this Twitter thread, by the New York Times’ Rory Smith. It deals in more than just that one theme, but it's pertinent – unfortunately – to the reaction which has met Takumi Minamino. The response is better, certainly, and much fairer than it would have been ten or twenty years ago, but the conversation is still visiting uncomfortable places.

Signing a player of any nationality potentially increases a club’s global marketing appeal. And yet it’s only ever something you hear said of players from Japan and Korea. And also Christian Pulisic, as it happens, but mainly Japan and Korea.— Rory Smith (@RorySmith) December 19, 2019

If there’s a consolation, perhaps it’s that a tipping point has been reached. The perception of Asian players in England was due an upgrade after Park Ji-sung’s highly successful spell at Manchester United, but the impact of Tottenham’s Son Hueng-min, a legitimately world-class player, has all but defeated the orthodoxy, while Minamino’s busy, waspish craft might chase it off once and for all.

RANKED The 100 Best Football Players in the World 2019

QUIZ Can you name every Arsenal player with 10+ Premier League goals?