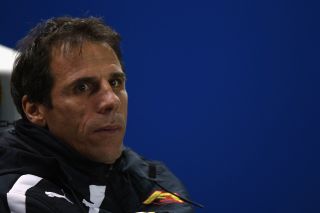 Zola's side were denied what looked to be a clear goal to Fernando Forestieri that would have put them 2-0 up at Brighton and Hove Albion, with Watford then dropping two points in a 1-1 stalemate at the American Express Community Stadium.

Forestieri's shot had taken a touch from Brighton's Gordon Greer, but the latter's attempt to control the ball was poor - and he was forced to try and clear off his line while falling further backwards into the goal.

His clearance attempt seemed too late, but Watford's appeals for the goal to be paid were waved away - and Andrew Crofts equalised moments later for the hosts - and the former West Ham boss was fuming with the outcome.

"There's no doubt about it, it's definitely a goal," Zola said.

"Everyone has seen it apart from the referee and the officials.

"That is the disappointing part, the goal did not happen in a crowded area, there was only the player, the ball and the line and it has not been seen.

"I am disappointed because it would have given us three points.

"In a championship in which so much money is involved - they say it's £120million for the teams that go up - it (technology) would help the officials keep everything under control.

"If it is something we can use to make the game better why not? After today, I would like it to be at least considered."

Brighton manager Oscar Garcia claimed he did not see conclusive footage that the ball had fully crossed the line.

"From my position it was impossible to see," Garcia said.