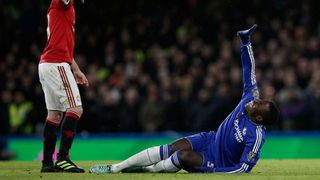 Kurt Zouma returned to Chelsea training on Monday as he continues his recovery from a cruciate ligament injury sustained in February.

But, having risen to prominence in the latter stages of Jose Mourinho's tenure, Zouma picked up an injury early in Guus Hiddink's caretaker spell - leaving the field with a knee injury during a 1-1 draw with Manchester United.

The French defender was able to complete some parts of training in Austria ahead of Chelsea's second pre-season friendly against Wolfsberger on Wednesday.

New manager Antonio Conte was also able to get a first look at Michy Batshuayi, who joined up with the squad late on Sunday and was thrown straight into training on Monday morning.

Our new signing has joined up with the squad for training today... July 18, 2016

Batshuayi was signed from Marseille for a reported fee of £33million this month.