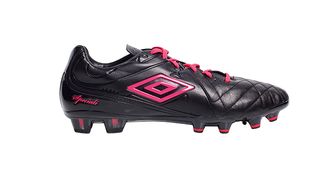 1 The softer the better

When I was at Chelsea there were a few players, including John Terry, who used to run their boots under hot water before they played just to make sure the leather was as soft as possible. This certainly doesn’t do any harm. Put your hand in the boot and just run a little hot water over them before towelling them off. Also, using an insole can help the boots maintain their shape.

It’s best to get that mud off as soon as possible. So grab a brush and run them under water as soon as you can. Try and get every bit of mud off before hanging them up and letting them dry naturally. Obviously the sooner you do this the better as it gives them the maximum opportunity to dry off. Don’t put them on a radiator, though – it’s going to dry them out and they’ll be as tough as bricks.

It sounds like a ’70s crime-fighting duo, but it’s actually key to keeping your football boots in tip-top condition. Dubbin is a leather protector that’s been used by footballers for generations, and it can simply be rubbed onto your boots before adding a bit of polish with a cloth. Some may consider it old-fashioned, but it does work. [You can buy dubbin online at dubbin.co.uk].