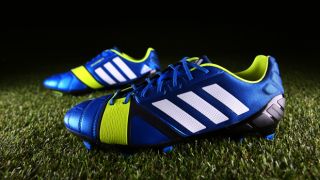 Goalscorers hog all the glory. Tricky wingers get bums out of seats. Fans adore heroic defenders. But who loves the midfield workhorse? The fella who runs around the pitch, fighting fires, clearing up other people’s mess and trudging off the pitch to little fanfare.

The boot bods at adidas that’s who. Rather than churn out more flashy footwear for the traditional headline grabbers, they’ve decided to suit up the unsung heroes with a new pair of game changers: The Nitrocharge.

The boot has been designed for ‘The Engine’ of the team, as adidas product manager, Michael Meinhold, explains.

“The Nitrocharge is for a player that is involved with all aspects of the game, a player who operates at high intensity and is relentless on-pitch.”

Sound like you? Didn’t think so. We know you break out in a sweat just lacing up your boots, but these latest creations are built to power you around the pitch.

A flash of nuclear yellow (we made that colour up) across the forefoot represents the Energy Sling – technology tasked with aiding lateral movements – helping you to slalom through challenges.

If you’re slower off the mark than a one-legged donkey the Energy Pulse soleplate is there to give your acceleration a much-needed boost.

The midfield battle is no place for a flashy striker’s wafer-thin boot so the Nitrocharge has been equipped with padding around the heel to protect you from kamikaze challengers.

Time for the water carrier to take centre stage. Or just cough and splutter in the centre circle. Either way FFT loves you.