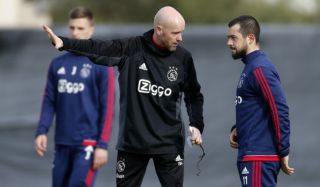 Treat players like individuals
It’s no use just talking to players as a group – you need to get to know them one on one and understand what makes them tick. I worked with Sam Allardyce at Bolton and he was fantastic at that. Terry Venables was the same; you could sit down with him and have a beer if you wanted to. It made the working relationship very comfortable. Some coaches are quite strict and regimented, but that doesn’t work for everyone.

Rule with authority
Initially I was assistant manager and Garry Flitcroft was in charge. We had a good cop, bad cop partnership. He was a ranter and raver, and the players would come to me and tell me things rather than going straight to the manager. Since I’ve become boss I’ve had to get the balance right between being approachable and also keeping that gap, so the players know who is boss.  I don’t want to rule with fear, but the players need to be wary of p****** the manager off!

Stay level
When you’re a player losing a game ruins your weekend, but as a coach it ruins your week.  I’ve learned you can’t get too high when you win or too low when you lose, otherwise you’ll burn yourself out. Like any job, coaching can be a grind. I could put on a nightmare training session because of things out of my control – I might have bad weather conditions or missing players – but I can’t let that affect me or I’ll lose authority. There is a lot of pressure in coaching – you have to learn to handle that if you want a long career in the game.

Be open to new ideas
I suffered a brain injury when I was in the prime of my career and became very depressed as I tried to get back to my best. Luckily, I had good managers who were willing to try new things to give me the best chance of recovery. I worked with a psychiatrist – Dr Steve Peters – years before he became known for working in football. Graeme Souness was my boss at Blackburn, and a little bit old school, but he was open enough to let me have treatment.

Take risks
Courses are fantastic and allow you to speak to some very knowledgeable people about the art of coaching, but nothing beats experience. You need to throw yourself in at the deep end and really get a feeling for life on the touchline. I’ve found I’ve learnt the most from thinking about how previous coaches got the best out of me and then implementing my own ideas and seeing how players respond. If you don’t take the leap, you’ll never know if you can do it.

How to improve your confidence as a coach
Do former players make good coaches?
Making the transition from player to coach
6 ways to improve your leadership skills
The DNA of a great coach