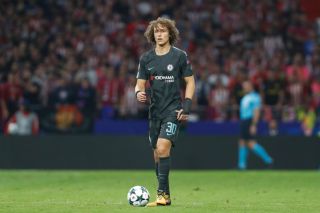 Hi David. You seem to have a very laidback personality – how do you stay so relaxed on the pitch?
I'm anything but relaxed! But thanks; I'm happy you think that. When you play at this level of football there is no room for being relaxed at any second at all. As a Chelsea player, I’m involved in top-level competitions all season long and my level of concentration is just as high as my responsibilities. The day before every game, I’m already living it. I think about the game, plan my strategy, focus on my opponent’s ability and so on. This thought process continues until the final whistle of the game and it soon starts again in preparation for the next match.

Some players describe suffering from pre-match nerves – is this something you’ve experienced?
The most important thing is to forget everything that surrounds you away from football and focus on the manager’s advice. If you have got his confidence and also your team-mates’, as well, it’s all you need to show your quality on the pitch. Facing tough moments throughout the 90 minutes is part of the game, but you have to remain focused and forget any particular mistake that might happen. If you manage to do so and keep calm, you end up avoiding bad decisions.

Gary Neville said that you played as if ‘being controlled by a 10-year-old on a Playstation’ during a defeat to Liverpool in 2011. Did that hurt you?
I prefer to give attention to constructive criticism. I respond well to that type of feedback because I can learn from it and improve in the future. This type of advice makes you reflect on your game and informs how to improve from a mistake I may have made. Helpful advice, which comes from polite people, for example family, friends, coaches and team-mates, is always welcome. I get stronger with this kind of criticism; it makes me a better player and a better person, too.

You’re a centre-back who likes to get on the ball a lot. How did you become so comfortable in possession?
This comes from my time in the youth teams of Vitoria, back in Brazil. I used to play as a holding midfielder there and developed this taste for getting the ball and trying to start an attack whenever it was possible. I practised how to control the ball well, keep hold of it and pass it well over short and long distances. These skills are always important regardless of your position in your team’s formation. I’ve utilised these attributes at every club I’ve played for since then and tried to show it in every competition. I’m always trying to improve my skills and correct mistakes during training sessions. Nothing comes for free.

Do you think the role of a defender has evolved recently?
Yes, it’s definitely changed because football as a whole has changed as well. But at the end of the day, your duties will always depend on manager's decisions. The centre back’s role usually gets affected by the system that your side uses and the strategy you have, so it will be different for every club. In some systems, there’s more freedom for a defender to go forward, in others you’ve got stay back all the time. Also, in the past it was quite rare to see defenders taking a curling free-kick – they would be powerful shots. Nowadays, we see players hitting the ball like forwards and midfielders, right?

Do you prefer playing as a holding midfielder or a centre-back?
I prefer to do whatever the manager wants. At the moment, I’m playing more as a sweeper for Chelsea, but I have also played in front of the centre-backs during my first spell at the club. So, it all depends on the manager’s decision, which can also be impacted by the strengths and weaknesses of our opponents. For me, it isn’t difficult to adapt to a new role. As a professional footballer, you must be ready to fight for your team, no matter where you are on the pitch.

How big a challenge was it adapting to European football when you joined Benfica, after growing up in Brazil?
I believe that the culture of the country influences its style of football. You carry the values you learn off the pitch onto it as well. In general, European players have more discipline in comparison to South Americans. On the other hand, improvising might be easier for a South American. But this is changing because of the huge number of South American players in Europe, which means both cultures influence one another. But some differences will always exist. And as a Brazilian, I must say that it’s an advantage if you know how to improvise at difficult moments.