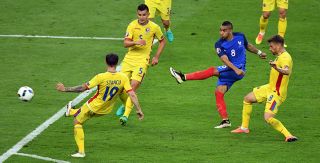 “For me, a good No.10 – a real no.10 – is an unselfish player. I’ve always said that I prefer to provide assists for the team than score goals. You must be selfless if you want to influence the game from this position. It’s all about helping to put your team-mates in the best possible situation to score a goal. Whether that means providing the assist for a goal or playing the penultimate pass in a move, the absolute priority is setting up the chance as best you can.”

Stay on the move

“Most attacking moves go through the No.10, so it’s your job to provide the link between the midfield and attack. When you’ve got a defender glued to your back, you have to move an enormous amount to try to tire him out. Losing your marker is also a question of positioning. By getting in behind them or putting a certain amount of distance between you and them, it’s possible to take your marker out of the game with one accurate pass or one neat bit of control.”

Work as a unit

“With movement you can give yourself room to play. Part of the No.10’s role is finding pockets of space in dangerous areas of the pitch, but all of your movements need to be co-ordinated with the two defensive midfielders behind you. Everybody has to move at the same time so that you don’t end up on top of each other. Your opponents won’t be able to track everybody so it’s inevitable that at some stage the gaps and spaces will start to open up.”

Know where to go

“At West Ham we do an enormous amount of work with the ball, and that’s how you get to know your team-mates. Pedro Obiang, Mark Noble, Alexandre Song and Cheikhou Kouyate have all become familiar with my way of playing – when they’ve got the ball, they know where I’ll be – and I’ve worked out the runs that the strikers make. I know that when Andy Carroll [above] plays, he’s a different profile to Enner Valencia. You learn these things in training and by playing lots of games.”

“Having variety in your game is important if you want to be able to beat a defender in a one-on-one situation, but speed is also key. In the Premier League, the pace of the game is intense, and you get closed down quickly. You often have only a very small window of time to produce a moment of skill, or a pass, or a dribble – so if you’re going to do it, make sure you do it quickly and intensely, because that increases your chances of pulling it off.”

“When I was young, dribbling past players was one of my standout qualities. I had that ability from the start and I have managed to maintain it, but it’s a part of my game that I still work hard on. To be an effective playmaker you can’t keep repeating the same trick – you have to be creative and come up with different solutions. You have to make sure that the defender can’t work you out and that you don’t become an easy player to stop. It’s an important aspect of my game.”

Sports psychologist Steven Sylvester tells you how to become unselfish in the final third...

“Creative players need an open mindset to unlock the peripheral vision to see their team-mates in the final third and make the right choices to set up chances.

Players who are driven by ego – personal gain and self-interest - have a closed mentality, which can negatively affect performance because they can’t access their full field of vision.

They will often have a shot at goal when another man is in a better position because they simply don’t see them. This can result in a wasted opportunity and anger their team-mates.

A No.10 must be emotionally and tactically flexible to serve the team effectively. You can achieve this by thinking about how your actions will benefit the team or club as a whole, rather than yourself.

This will release you from a fixed mindset, make you more relaxed in high pressure situations and the team will operate better as a unit as a result.”

Dele Alli: How to play with confidence

Andres Iniesta: How to boss the midfield