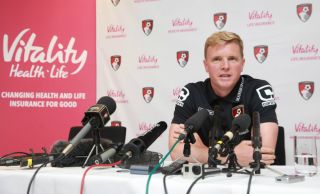 Eddie, did you do any training to prepare for press conferences before you became a manager?
No, I was lucky because when I first became a manager, Bournemouth were in League Two and press conferences were basically one on one chats with the local reporter. I think that was a good grounding for me before being exposed to larger groups and different types of questioning.

How have you adapted to the increase in media attention at Bournemouth?
The jump from the Championship to Premier League was huge. We never had any attention nationally and then suddenly we were being talked about every week. The atmosphere in Premier League press conferences is different and it’s very hard to prepare for them. You just learn every week through experience.

Does your press officer brief you on potential lines of questioning?
I am briefed on certain questions that he thinks may come up, just to give me an understanding of the tone of the questions and what they may be about. But there are never any certainties because often there will be things that are thrown up that you just can’t second-guess. I think the relationship between me and Anthony [Marshall] is really important – I need to trust him and vice-versa.

Is there a type of question you find most difficult to answer?
It’s hard when you get asked about something you know very little about. As a Premier League manager you’re asked about politics, current affairs and anything major that’s happening in the world. The media want you to have an opinion on everything and if you don’t know anything about that subject you could end up saying something you didn’t mean to say. I have a rule that I’ll only talk about subjects I have a knowledge of.

Are press conferences a good tool to boost morale at the club?
I’ve personally never used them for that purpose, but I think other managers do. I really get that, because you have to use every tool available to motivate their team or appease fans and improve the atmosphere that they play in. I just try to be honest with the media and the fans and give a true account of what I feel at that time. That’s the approach that works best for me, I never try playing games.

Some managers don’t like discussing tactics – are you the same?
I’ll be honest; I always try to avoid talking about tactics as much as possible because I don’t want to risk giving the opposition an advantage. You can easily give them clues about how you might play. I very rarely mention my potential starting XI as well – I like to give the opposition as little information as possible.