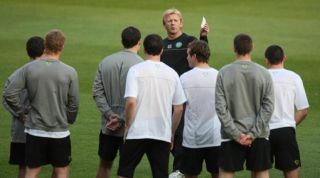 You mustn’t get too emotional in these circumstances. Think about what has happened in the game and act on it. Don’t get carried away with big speeches because you need to make sure the team continue to do what they’ve been doing. Pre-match team-talks can be nicely planned and theatrical but at half-time try to stick with what is happening in front of you.  It’s all about the players staying focused and staying organised – they don’t need some Shakespearian monologue at this stage. Just instill confidence quietly by telling them how well they’re doing.

Shake off complacency: Know when to go ballistic

A footballer won’t ever not be trying. They’re professionals, they love playing football and so complacency isn’t something we deal with. No, what can be a problem is a lack of concentration. That can come about from players thinking the game will be won easily and a half-time team-talk in these circumstances can vary. Some players need a rocket up their arse, but don’t do it for the sake of it. At Celtic we were expected to win nearly every league game but there were many times at half-time that we weren’t. The key to changing our fortunes was knowing when to go ballistic!

Build their confidence: Tell them to regain some pride

Rafa Benitez had to do it in Istanbul. 3-0 down and out. It’s said he just talked tactics, but the key was simply bringing on a better player in Didi Hamann. It can be that simple. Both Alan Pardew and Avram Grant have managed it at half-time this season, although in Grant’s case it is said that Scott Parker did his talking for him. As a manager that’s fine. If a player goes off on one, then on you go. A manager is thinking damage limitation but what I’d tell them is that the punters, their families, their partners, are all in the crowd and it’s embarrassing. Tell them to go out there and regain some pride.

Keep them focused: Remind them of their plan

This is something that will make me mad, when players lose focus as the fancy flicks come out. The game should be played the way you planned it and I can’t stand seeing players trying fancy tricks or things they’d never try in normally. Some would say the fans deserve to be entertained but fans want to see goals and I’d tell any player to not disrespect the opposition, or more importantly the other manager by showboating.

Calm them down: Stay quiet take a breather

This is hard. If a game is boiling over and tensions are high then the manager is feeling that too. I’ve learned with time to deal with it by not talking for a bit. I’ll take a breather, tell the players to get a drink. If I’m angry they will be angry so calm down, regain your faculties and your team will follow suit.

Ease their nerves: Look at yourself first

First of all deal with your own nerves. I took Celtic to the San Siro and will admit that I was in awe of the place. You have to keep that from the players because it will rub off on them. You have to reassure them if the fear is taking over. These are guys you know well. Remind them of the things they do well, that they love the game and should be having fun. With the right words the shackles can come off and performances can be turned around but don’t think that you’ll always say the right thing or you’ll change a result.